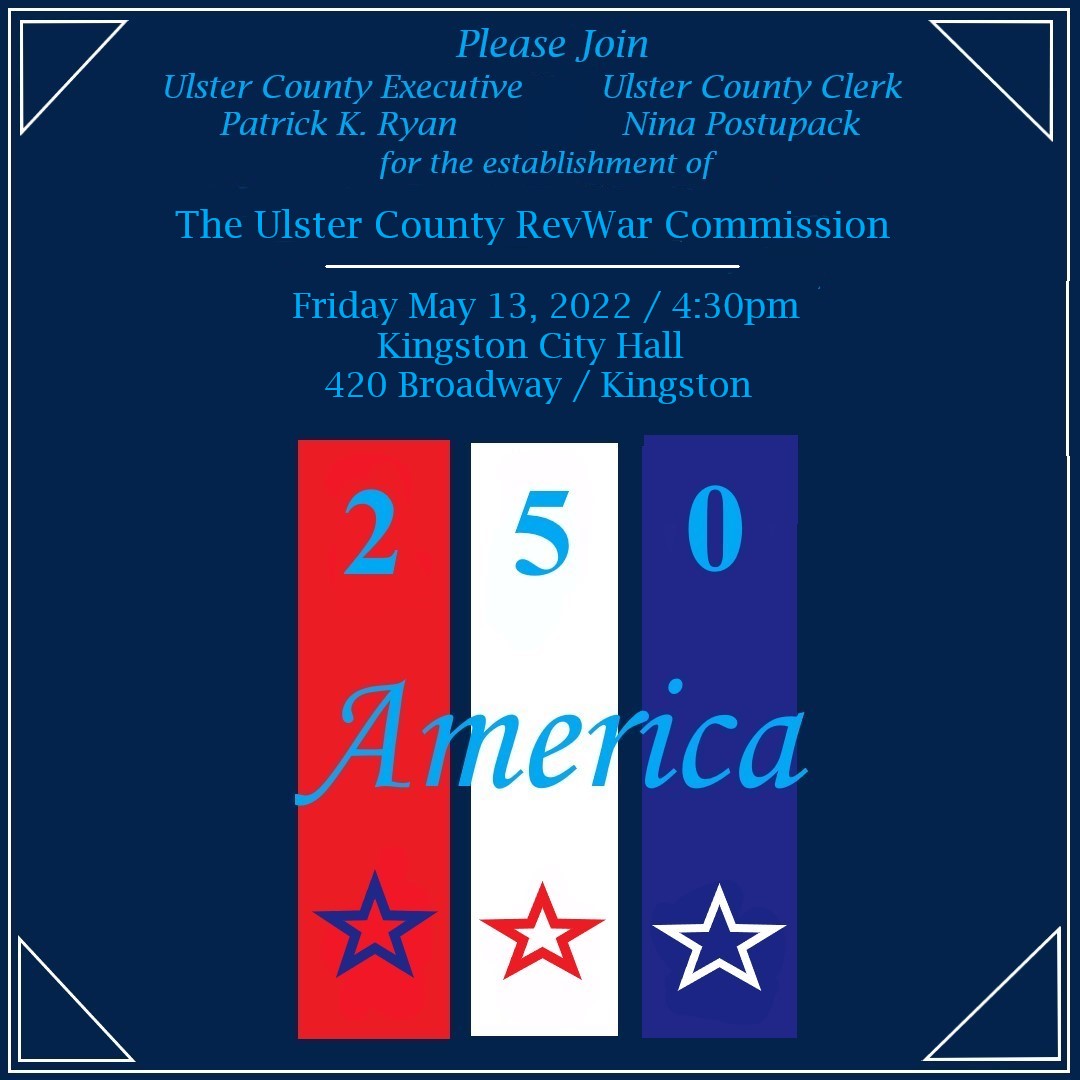 Kingston, NY – Ulster County Clerk Nina Postupack and Ulster County Executive Pat Ryan invite you to join them for the signing of the Executive Order creating the “Ulster County RevWar 250th Commission” in commemoration of the 250th anniversary of the Revolutionary War.  The signing will take place on Friday, May 13, 2022, at 4:30 pm at Kingston City Hall, 420 Broadway, in the Common Council Chambers.

In 2016, Congress passed H.R. 4875, creating the “United States Semiquincentennial Commission” to plan a commemoration and observance of the July 4th, 1776, Declaration of Independence. The Commission encouraged all States to form their own Semiquincentennial Commissions to help plan State-wide celebrations and commemorations of the 250th anniversary of the Revolutionary War, which New York did in July of 2021.  With the bill now signed by the Governor, New York State will be making funds available to eligible local commissions to promote events and commemorations of this momentous anniversary.

Ulster County Executive Pat Ryan will be signing the Executive Order creating the “Ulster County RevWar 250th Commission” this Friday at 4:30 pm.  The commission will serve as the focal point for event planning, discussions, and everything else necessary to serve the goal of observing and commemorating the July 4, 1776, Declaration of Independence as well as the eight years of the American Revolution from 1775 to 1783, and what it means to be a free country and an “American.”  Members of the Commission, some of whom will be present for the signing, will include local historians, museum & historical society board members, cultural heritage organization leaders, educators and more.  The Commission will run from 2025 to 2033 and will ultimately terminate on November 25, 2033, on the 250th anniversary of the date when the last British troops left American soil.

“This is a special opportunity to involve our whole community in the commemoration of a pivotal moment in our country’s history, and I am proud that our commission will highlight the role of revolution and colonization in our founding and recognize the ongoing struggle of women, people of color and indigenous people, who did not receive the same inalienable rights, protections and freedoms under our founding document,” Ulster County Executive Pat Ryan said. “I want to thank our Ulster County Clerk Nina Postupack for her partnership in this important endeavor.”

“As one of the original three Dutch settlements in the United States, Ulster County’s history is vast and encompasses the entire history of our nation,” stated Ulster County Clerk Nina Postupack.  “This commission gives us an ability to share that history with the rest of the country.  We also have the opportunity to involve our youth in these commemorative events, passing on our history to the next generation.”